Cash Reigns in a Time of COVID-19

Think cashless societies are inevitable? Figures show that cash reigns in a time of COVID-19.

While many have suggested SARS-CoV-2 has pushed us closer to a cashless world, reports from around the world show the people of many nations are finding comfort in cash.

In May 2020, Brazil urged its mint to increase production of banknotes to ensure it could keep up with heightened demand resulting from its stimulus program.

According to the Bank of Canada, notes in circulation “increased significantly in March and April 2020 compared with the same two months in the previous five years.”

The value of euro banknotes in circulation increased by the largest amount since the 2008 financial crisis in spring of 2020. The European Central Bank also launched a campaign to ensure cash access for all in December 2020.

In summer 2021, cash usage climbed fast in France as the nation’s outlook brightened.

India: Cash in Circulation Up 10 percent in India

According to The Times of India “currency in circulation has risen to 26.9 lakh crore - a hike of 10 percent - since the lockdown began” since 20 March 2020. By December, cash withdrawals had reached an all-time high.

Israelis are turning to cash, with demand up 15.7 percent in the six months leading up to August.

Currency in circulation hit a record high of ¥543 trillion in May 2020 as Japan's central bank used cash to cushion its economy from pandemic fallout.

Money in supply within the Kenyan economy has defied the shocks of the COVID-19 pandemic expanding by Ksh.203 billion or an equivalent 30.7 per cent.

Between December 31, 2019 and April 30, 2020, Mexico saw an unprecedented spike in cash demand. The central bank credited this to the public taking precautions in light of the pandemic.

Cash in circulation increased by $1 billion dollars ahead of the COVID-19 imposed lockdown in New Zealand, and rose 15 percent year on year in the second quarter of 2020.

The stock of money in circulation in Nigeria increased by N95.13bn from N2.29tn at the end of June to N2.39tn in July, data from the Central Bank of Nigeria have shown.

The value of cash in circulation since the beginning of the year has increased by over 27 percent, according to the National Bank of Poland.

In the first half of 2020, the volume of cash in circulation increased by 14.4 percent year over year to UAH 486 billion.

Cash withdrawals in the UK increased by two thirds following the easing of lockdown measures on 4 July 2020, which saw pubs and restaurants reopen across the nation. A study in early 2021 found cash remained the most popular way to pay for shopping and the Post Office reported record cash withdrawals and deposits in June 2021.

The Financial Times, in its piece from 17 July 2020, suggested Americans found comfort in the security of cash during the crisis. A 2021 YouGov survey also showed, as in the UK, American shoppers also prefer to pay cash.

Worldwide: Why Cash has been Piling up During the Pandemic

A 2021 study found that despite changes wrought by COVID-19, payment cultures around the world remain diverse and cash is 'alive and well', coexisting with cashless options. 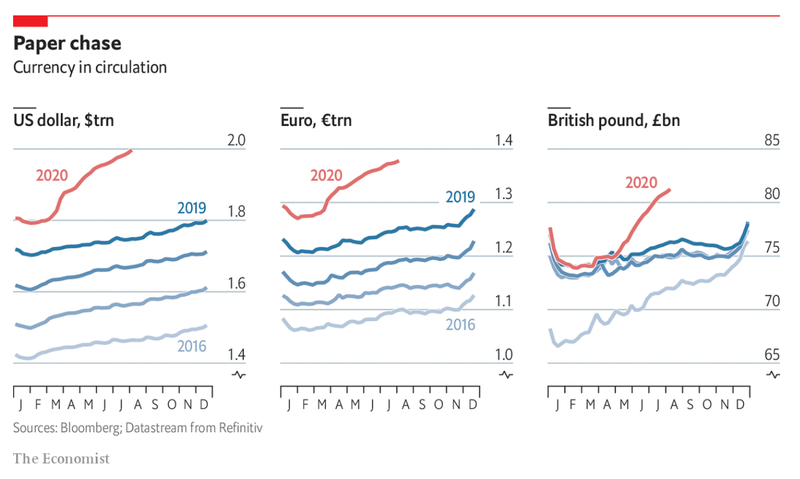 By the second half of 2020, economists were seeing clear patterns of a "surge in cash demand" fuelled by the pandemic.