The 2020 McKinsey Global Payments Report—released on 2 October—highlights ‘accelerating winds of change in global payments’ caused by the COVID-19 pandemic.

Compared to 2019, McKinsey expects payments revenues across all sectors—cards, mobile, online, cash, etc.—to be down seven percent by the end of 2020. Payments revenues shrank by around 22 percent (equivalent to roughly $220 billion) in the first six months of 2020 alone.

Overall, the crisis is compressing a half-decade’s worth of change into less than one year—and in areas that are typically slow to evolve: customer behavior, economic models, and payments operating models. The events and trends of 2020 have undeniably created a changed global context for payments.

With lockdowns imposed across many nations, cash usage dropped in step with severe demand-side shock. Discretionary spending worldwide was initially down 40 percent, with the impact felt most strongly in the travel and entertainment industries (experiencing 80 to 90 percent reductions). While some sectors have rebounded—such as retail, which has seen an overall shift towards online sales—electronic payments have risen, and cash use remains lower.

In retail, the impact was not a decline but a shift in buying behavior. […] In Europe, differences in shopping behavior between geographies […] and age groups eroded as many consumers […] turned to online shopping for the first time.

After an initial spike in cash withdrawals ahead of lockdowns observed in Germany and the United States, concerns around the risk of contracting COVID-19 from high-traffic ATMs and the refusal of some merchants to accept cash (in spite of it being legal tender) pushed consumers towards e-payment options. With scientists and the WHO now emphasising aerosol transmission of the virus over its spread by touch—and the WHO being swift to confirm cash does not carry coronavirus—these early fears have still contributed to a reduction in global cash payments of four to five percent. This is the equivalent of four to five times the annual decrease in cash usage over the past few years, according to McKinsey.

Change in 2020 takes place four or five times faster than before. This puts all actors on the payments landscape under pressure to transform and adapt in order to preserve their positions and results.

The report also highlights how cash usage varies greatly by region. Sweden, the UK and the Netherlands are among the countries with the lowest cash transaction volumes.

Cash usage by country
Percent of cash used in total transactions by volume, % 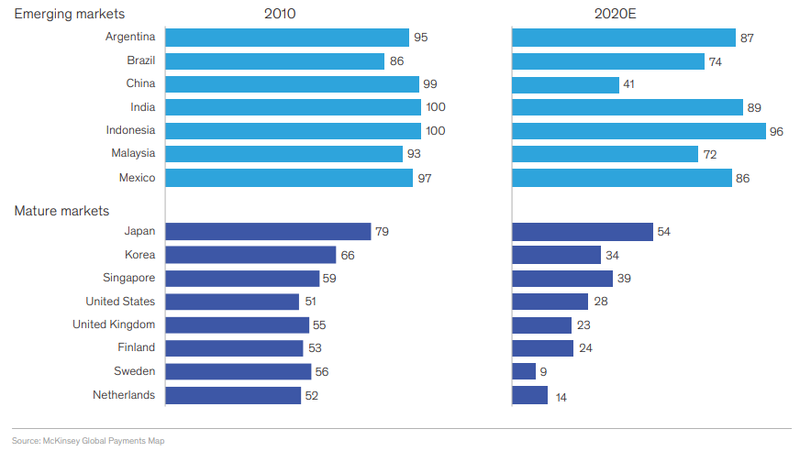 The majority of payment transactions are likely to rebound sharply as lockdowns lift. However, McKinsey observes, the move from cash to e-payments will probably continue, especially in developing economies. This despite the fact that cash in circulation has increased on a global scale by the largest percentage since the financial crisis 2008. According to McKinsey, this development takes place partly because lower cash usage is desirable for [commercial] banks, given the cost of handling cash is higher than the revenue it generates for them, while e-payments generate incremental revenue.